Ever the Hunted Review 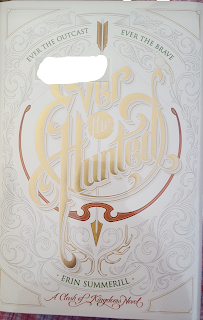 Let's just start of by saying the cover is gorgeous. It is the main reason why I picked it up. I will be picking up Summerills other works in the future outside of this series. This book is just not for me. I am pretty sure other people will enjoy this book a lot.

Okay and this book is also blurbed my Sarah J. Maas. My expectations were pretty high because of it which may have an effect of how much I enjoyed the book.

Ever the Hunted is about a girl named Britta. Her father was murdered and her mother was a traitor. She tries to survive. One day she is caught poaching on the kings land. Instead of being killed she has a choice of hunting down the murderer of her father, except the murderer is Cohen, her only friend and a person she has feelings for.

I thought the plot like was a bit cheesy and some of the things that happen to me were not really realistic.

The characters. I did not care for any of them. Maybe it is just me, please tell me it is not just me. I did not like Britta one bit. Her decision around where I stopped were, in my opinion, stupid. I hated all of them basically.

I think the world building could be better, however I did stop at page 91 so I won't really judge it.

I enjoyed the writing so I will probably read her other books outside this series. This one is just not for me.

Thank you for reading and I hope to see you in my next post for those non spoiler people.

Lets begin with the part when she sees Cohen again. She believes him. The first thing she did was hug him?! Did I read it right. Please let me know in the comments. I just did not find that believable. Basically that is where I stopped.

Thank you for reading this post and I will hopefully see you next time!
Posted by andreasbookishthoughts at 11:15 AM