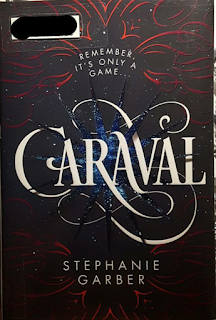 "Remember it is only a game"

Caraval is probably one of my favourite reads of the year so far. I will warn you to go into it with low expectations due to the hype. that is what I did and I think that it made a big impact on how much I enjoyed it. If you go into this book with high expectations, this book may disappoint you. I read other reviews and 90% of the negative reviews come from people with too high expectations. I personally went in expecting to hate it.

Caraval is often compared to The Night Circus by Erin Morgenstern. I see the similarities between each however both of them are different and they are not exactly the same. The similarity is basically the circus and the caraval are both travelers that only open at night. Everything that happens inside is different.

This book is about a girl named Scarlet. She lives with her father and sister Donatella known as Tella. Both of the sisters admired the The Caraval Master known as Legend and she and Tella always dreamed of going to Caraval. People participate in the performance, however if they get to invested in the game, they may not be able to tell reality from fiction. When Scarlet's father arranges her a marriage, Scarlet looses hope of ever attending Caraval.  One day Scarlet gets an invitation inviting her to Caraval. With the help from a sailor both of them escape to Caraval. However Legend has decided on kidnapping Tella for the game. Suddenly the game becomes more personal to Scarlet and she now has to find her sister.

I will say the beginning is slow. I found myself bored but honestly as I kept reading the book got better and better and I found myself invested in the story. I really liked the concept and I found some parts funny. I will say the author was a bit over descriptive at times and I think she used to many metaphors to describe things. I will also say I liked the ending but I wanted it to end differently at the same time.

When I say there are a lot of metaphors, I mean A LOT. I felt like they were over used but I managed to look past them.

I loved the plot and I found the story keeping at the edge of my feet. I kept having prediction after prediction and I really enjoyed it.

The ending though. I need the next book now!!!

Note Father does hit daughter in the face twice. She does bleed but is not seriously injured.
Posted by andreasbookishthoughts at 4:47 PM